Are you ready to drink Budweiser beer aged with Jim Beam barrels? 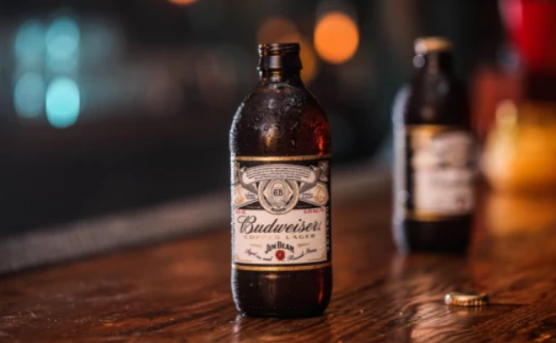 Stroll into any happy hour, and one of the more popular combos is likely to be a beer and a shot. For Budweiser marketers, a lightbulb went on when they saw how often people were pairing a bottle of Bud with a shot of Jim Beam. Now the two iconic American brands have officially teamed up on a new limited-edition beer called Budweiser Reserve Copper Lager. It’s not some bastardized boilermaker, but rather a darker ale aged on Jim Beam bourbon barrel staves.

It’s the third installment in Bud’s Reserve Collection, following 2017’s 1933 Repeal Reserve, which marked the end of Prohibition, and this past summer’s Freedom Reserve, inspired by George Washington’s own recipe found in his journals from the French and Indian War in 1757. For Budweiser’s vice president of marketing, Ricardo Marques, the new beer and the overall Reserve Collection are the result of the brand needing to be more innovative in how it approaches its products, and will help the brand stand out on a crowded shelf.

It wasn’t that long ago that Budweiser boasted that its beer was “not brewed to be fussed over” and “brewed for drinking, not dissecting.” It used a 2015 Super Bowl ad to take a swipe at the craft beer crowd, sneering “let them sip their pumpkin peach ale, we’ll be brewing us some golden suds.”

At the same time, Bud’s parent company, AB-InBev, was in the midst of a spending spree, buying up craft breweries all around the United States to be a part of its High End division. From Long Island’s Blue Point to Oregon’s 10 Barrel Brewing, the big brewer eventually built up a portfolio of 10 breweries in an attempt to get in on the shift in beer culture that was taking a significant bite out of its traditional brands’ market share.

Last year, the company said it was done with new acquisitions and would be focusing on organic growth from within. It may have sneered at beer snobs before, but having dropped out of the top three beers in U.S. sales earlier this year, and with Q1 2018 U.S. sales down 1.3%, the one-time King of Beers is now taking a different tack. Not only is the Copper Lager a deviation from the standard golden suds, the new commercial boasts of  “a toasted oak aroma, and a slightly nutty taste. Hints of vanilla, and caramel rye are followed by a deliciously smooth finish . . .” Dissect from that what you will.